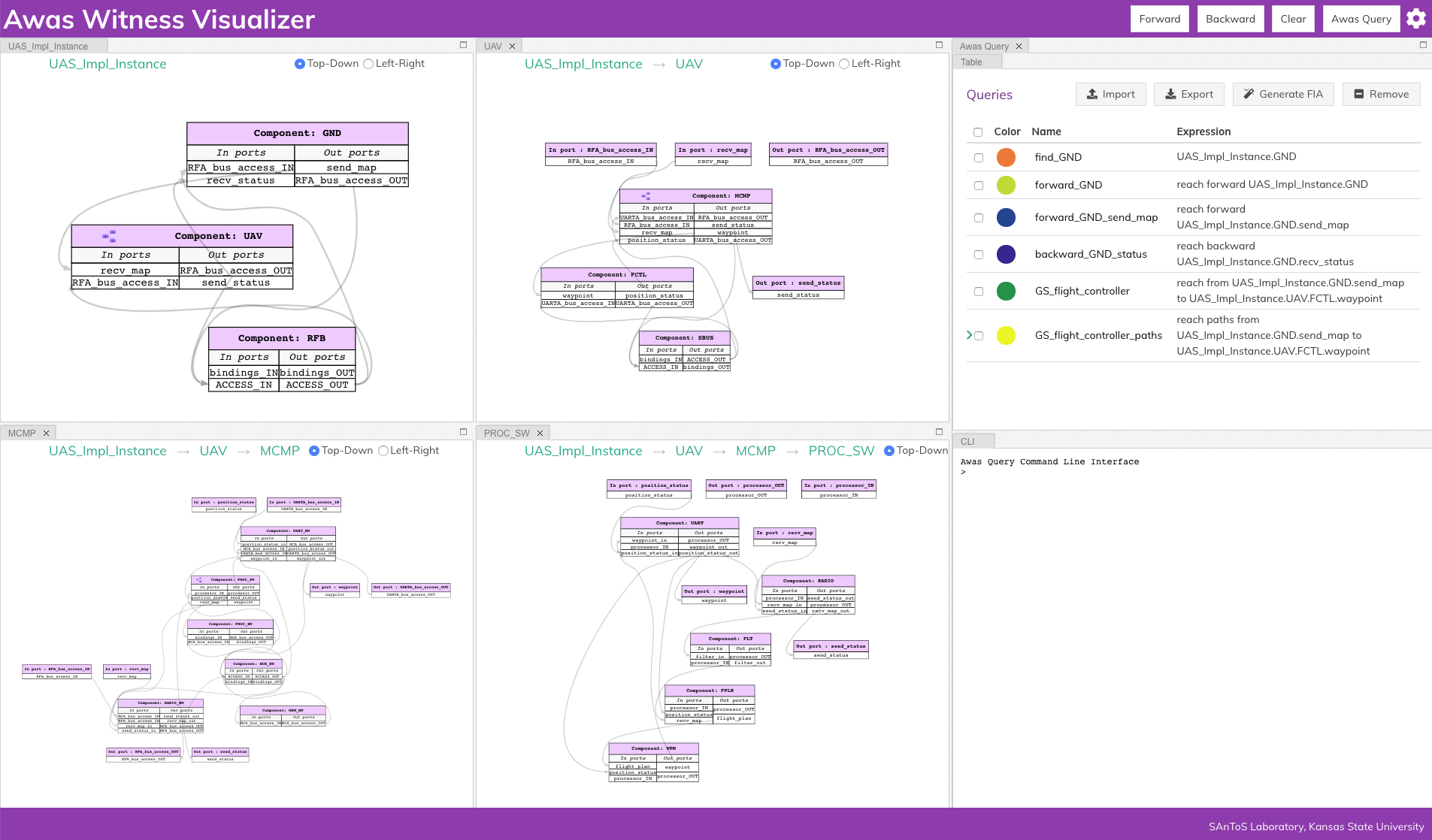 In this section, we illustrate a simple UAV surveillance system that is used as a running example to demonstrate the capabilities of Awas.

This system consists of a ground station and an Unmanned Aerial Vehicle(UAV). The primary function of this UAV is to conduct surveillance over a specified region. This UAV receives the region information, for instance, a map with the target location and obstacles, from a ground station. In turn, the UAV sends back status information.

This UAV consists of a mission computer and a flight controller. The purpose of the computer is to compute a set of waypoints(GPS coordinates) from a map and a flight pattern provided by the ground station. The flight controller acts upon these waypoints to progress on the surveillance task. The UAV sends a corresponding status code to the ground station whenever it reaches a waypoint.

OSATE can produce a system implementation diagram from an AADL system. The following section provides a side by side comparison between AADL instance diagram and Awas graph for the four systems of the UAV surveillance model.

2.3.1. UAS: The top level system with ground station and UAV¶ 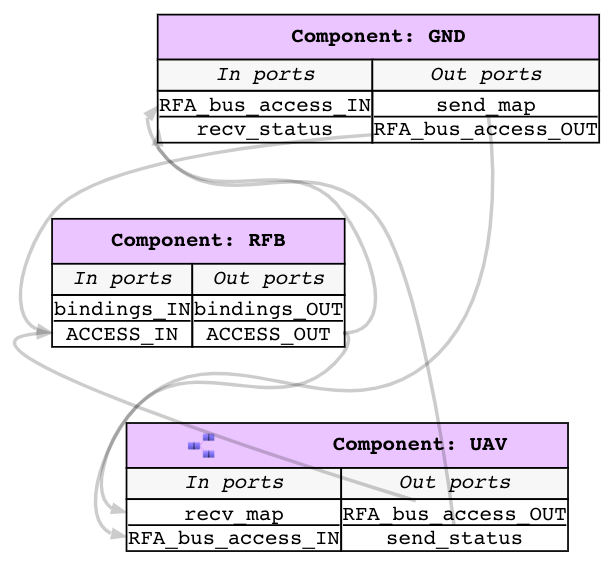 Both the AADL diagram and the Awas graph consists of three components namely GND, UAV, and RFB. However, in the AADL diagram the different types of components are differentiated by different component shape. Awas does not distinguish between the types of components. However, Awas explicitly segregates input and output ports. For in-out ports, Awas creates two ports one for input and the other for output. Thus you can see there are two RFA ports in GND component in the Awas side and only one in the AADL side. Awas also separates the bidirectional connections into two separate connections. 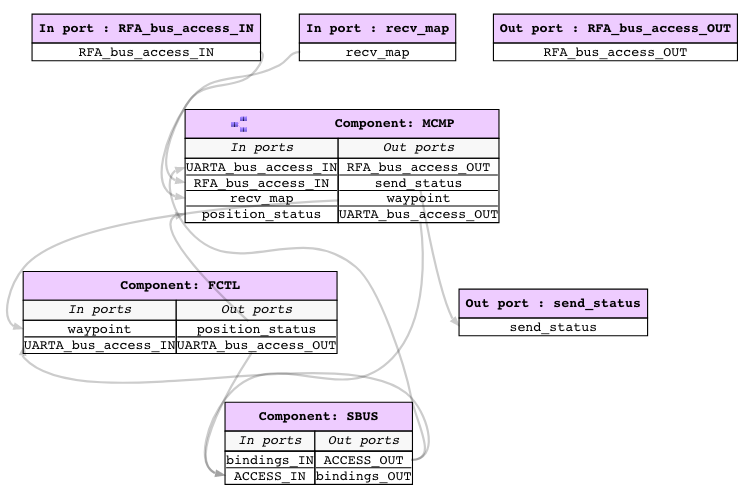 In a sub-system graph, Awas creates the parent component’s ports as nodes. The node recv_map is same as the port in the UAV component from the UAS system. Therefore, when clicked on either one of the port, highlights the port in both the graphs. 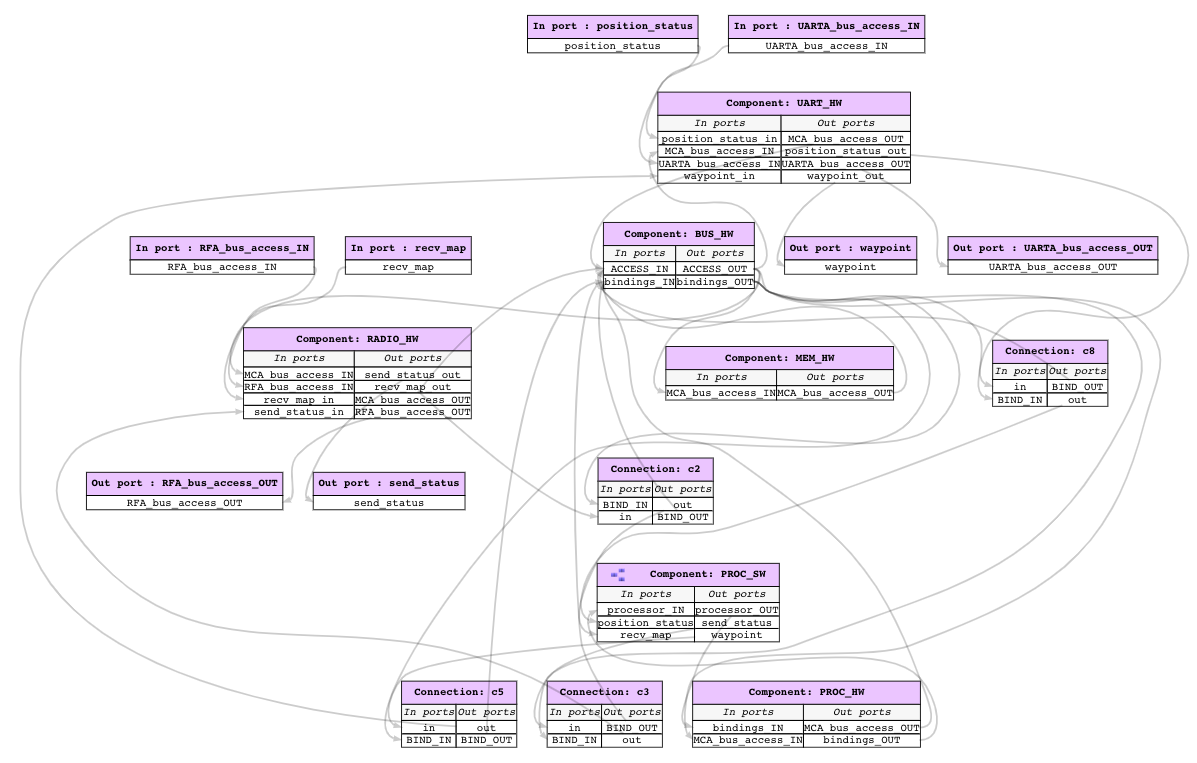 Awas graphs typically contain more edges compared to AADL diagrams. The additional edges capture the binding relationships between components. For example, the component PROC_SW has two ports processor_IN and processor_OUT connecting the component PROC_HW. These edges capture the relation that the PROC_SW representing the software of the system executes on the hardware PROC_HW. However, AADL diagrams fail to capture these binding relations and the non-trivial information flow through them.

2.3.4. Software - Composed of drivers and logic for computing the waypoints¶ 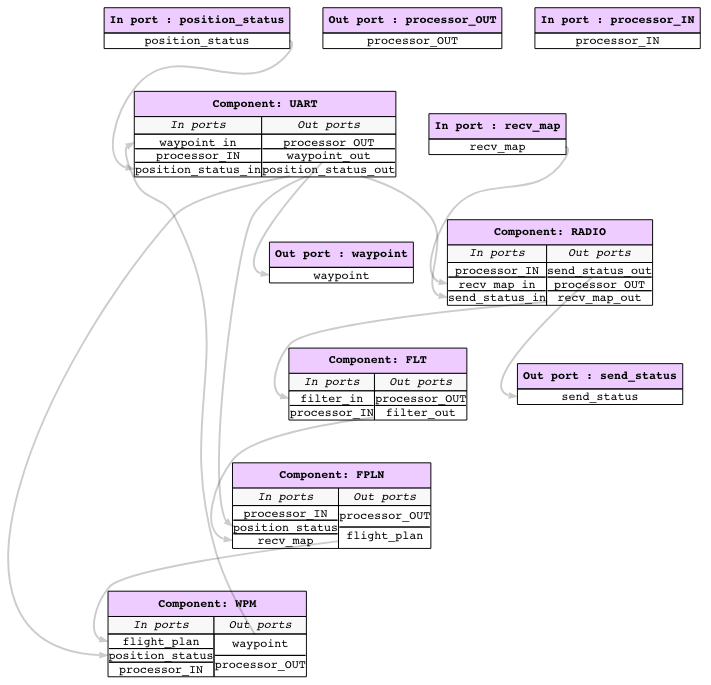 At the top of the Awas visualizer page, there are five buttons. The first one from the right is the Settings button to control the amount of information displayed in the Awas graph. The next button is the Awas Query button used to open the query interpreter and the results table view. The next three buttons are dependency analysis buttons discussed in subsequent sections.

Below the top bar is the Awas graph viewer. Each system in the AADL becomes an Awas Graph, and Awas allows the user to view multiple systems at the same time by reorganizing the graph viewer window. The top left of the graph viewer contains a breadcrumb trail that displays the hierarchy of the current component in relation to the system’s structure.

The View Option panel provides the ability to choose what information will be present in the Awas graph. 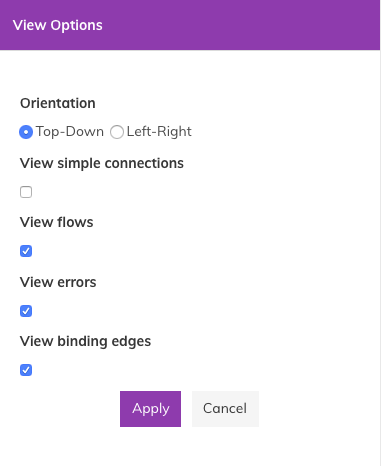 The view binding edges option in the view options panel modifies the underlying graph data structure. On large graphs, this toggle may take a few seconds to complete. Also, do not perform path queries in the presence of a large number of binding edges. Doing so may take a long time to evaluate a path query.

Flows are the AADL construct proving the intra-component dependencies by relating a component’s input and output ports.

By selecting the checkbox in the settings view, one can view the flow information in components.

In AADL there are three kinds of flows.

By clicking on a flow, Awas can reveal the relationships between flow and the ports of a component.

In AADL, a user can add flow relations to a connection indicating the information that influences the communication substrate. The AADL instance diagram fails to capture these flows. In Awas, users have an option to view or hide this information. Similarly, connections and the underlying communication substrate exchange information through the bindings relations that is missing in AADL instance diagram. Again, Awas provides an option to view or hide these bindings relation.

Awas can do two kinds of fundamental dependency analysis based on the direction of traversal. The user can use them to answer specific questions such as the following:

If the ground station sends the map, Where does information regarding the map flow? Also, where is it getting consumed?

The answer can be obtained by selecting the port send_map in the component ground station and clicking the Forward button on the top of the screen. This action highlights all the ports that receive the information from send_map. The flow highlighted with a darker shade indicates the consumption of this information. If the user wants to go down the hierarchy, they can double click on the UAV component to see the influence of send_map in the subsystems. 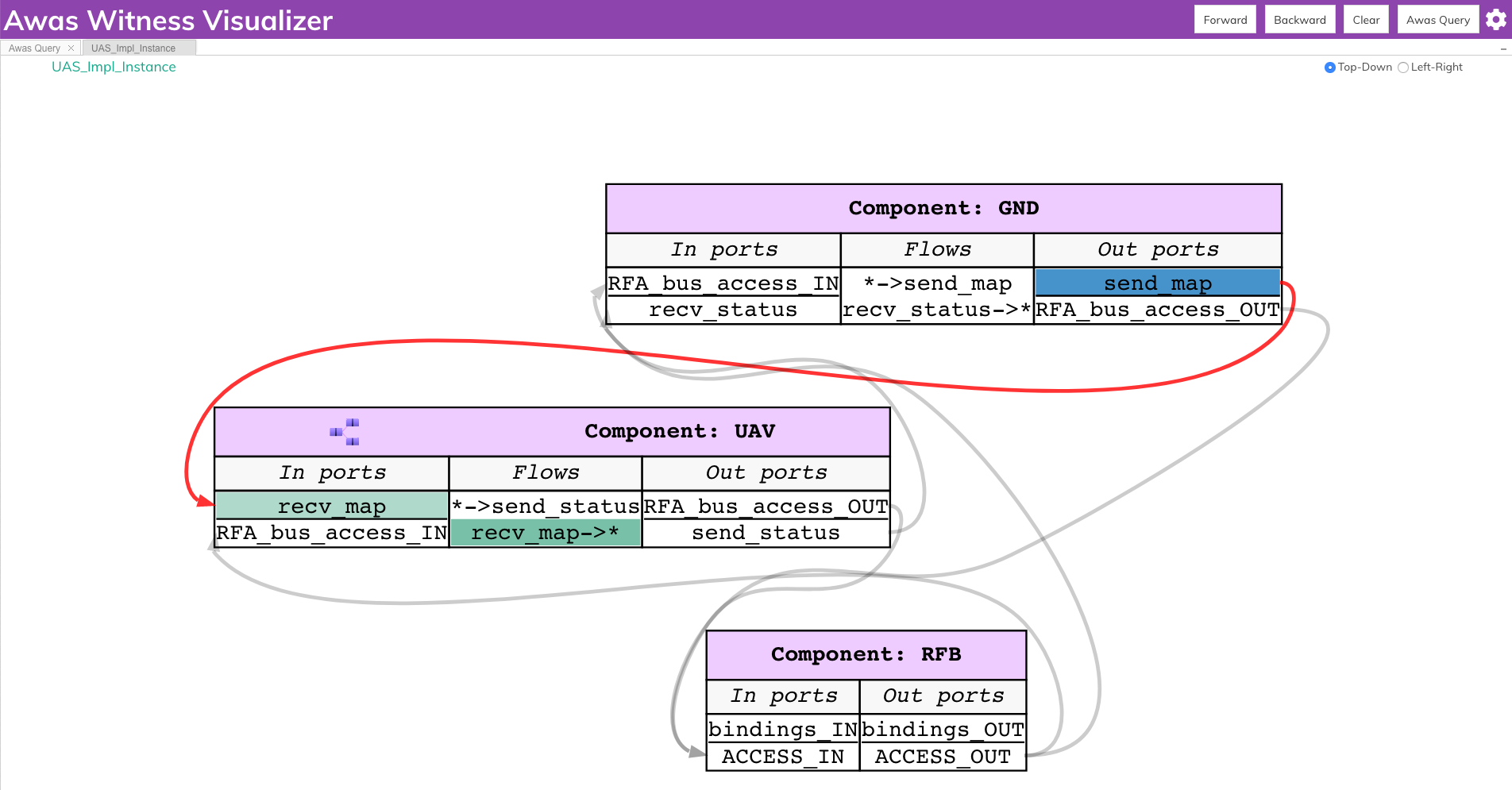 From where does information needed to compute the recv_status flow from?

2.4.2. Forward and Backward Analysis in OSATE¶

Along with the visualizer, Awas is also integrated with the AADL instance diagram. OSATE can generate different kinds of AADL diagrams, among them instance diagram shows a specific composition of the components in the system.

The Awas plugin provides these icons

The above image show the result of performing a forward reachability from the send_map port in the GND component. Awas computes port level reachiability and highlights the connections and ports that are reachabile form the send_map. AADL allows user to open the subcomponents by right clicking on the corresponding component and clicking show contents.

AADL diagrams allows precise customizations of the diagram by hiding or showing to get only the interested parts of the system to be displayed. Similar to the forward reachability, bacaward reachability can be performed from any port or component in the instance diagram. The user can export the diagram along with the result of the reachability in to images to include it in other reports.

While performing backward and forward analysis is quick and straightforward using the buttons, it is not easily reproducible by an automated regression testing suite. To remedy this, we provide a simple query language an interpreter inside the Awas visualizer. To open the query interpreter, click on the Awas Query button on the top right corner. 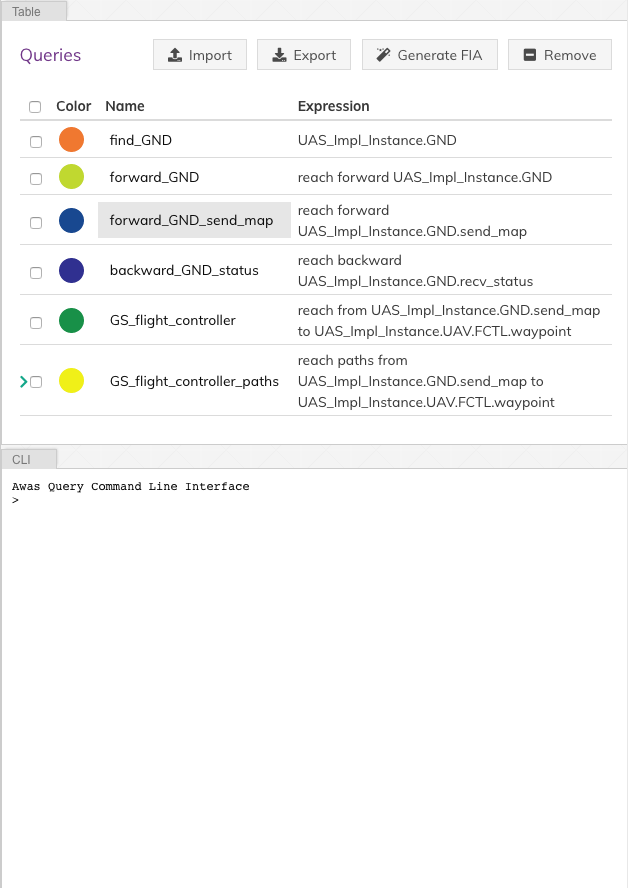 The last button to discuss at the top right corner is the Clear button. This button’s purpose is to clear the highlights on the graph. However, it can be useful to view the results of multiple queries at the same time.

The query language’s capability goes beyond the simple queries. Using the queries, the user can compose much more interesting questions.

when the ground station is sending the map, how does it get to the flight controller?

Using the previous query, Awas can capture the information flow between a source and destination, and yet, there are multiple ways information can flow from source to destination. If one wishes to enumerate all the individual paths, they can alter the above Awas query as follows.

The addition of the term paths instructs Awas to enumerate all the paths. This action suddenly converts the simple reachability problem into an exponentially complex problem as there can be an infinite number of paths if there is a cycle in the graph. Our solution to this problem is to enumerate all the paths without cycles and paths with all the relevant cycles. For example, suppose there exist a simple path A, i.e. path without any cycle. Furthermore, assume there are cycles in the graph, and the nodes of the cycles overlap with the nodes of the path A. Then we create a complex path with all the nodes of the path A and the cycles whose nodes overlap with path A. 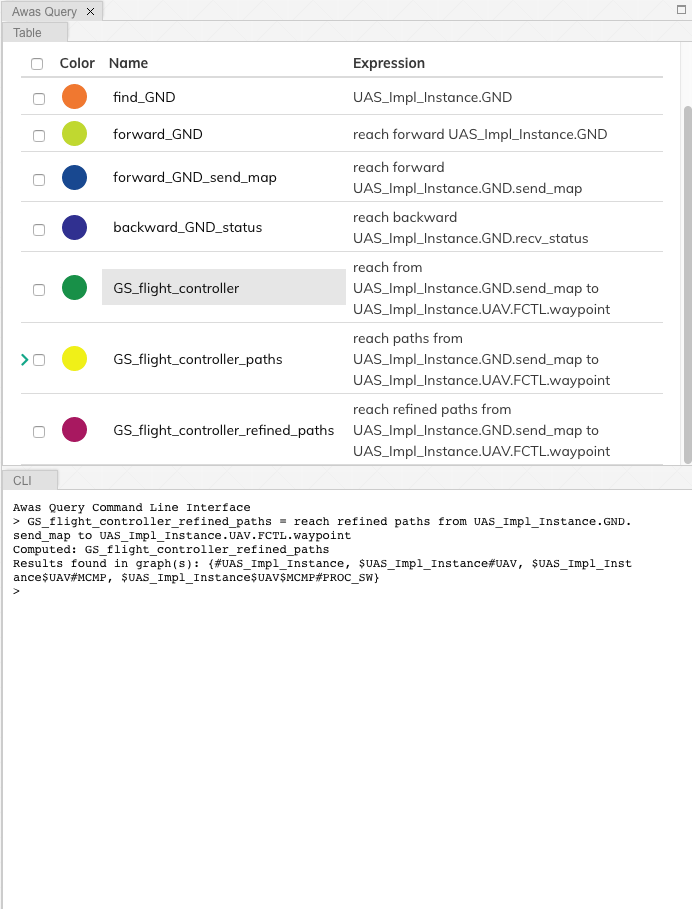 In the query view, you can see a little arrow in front of the query name which indicates the existence of more than one path. Clicking the arrow will show the list of paths. If one wishes to view only the paths that do not contain cycles, then they can use the keyword simple.

The result of the above query list three paths. Yet, we know there is only one path from the ground station send_map to the flight controller waypoint. This doesn’t mean Awas is incorrect. Awas is producing all the paths which include paths that flow using intra-component flow rather than the inter-component flows in the sub-graph. To obtain only the refined paths, one can use the term refined in the query.

What if only some of the paths listed are of interest to the user? Alternatively, what if the user wishes to see only the paths flowing through a component of interest. In these situations, the filtering capability of Awas can come in handy.

When the ground station is sending the map, is it always flowing through the filter component?

Clicking on the query name from the query view table will cause a The result is empty message to appear at the bottom right of the screen. 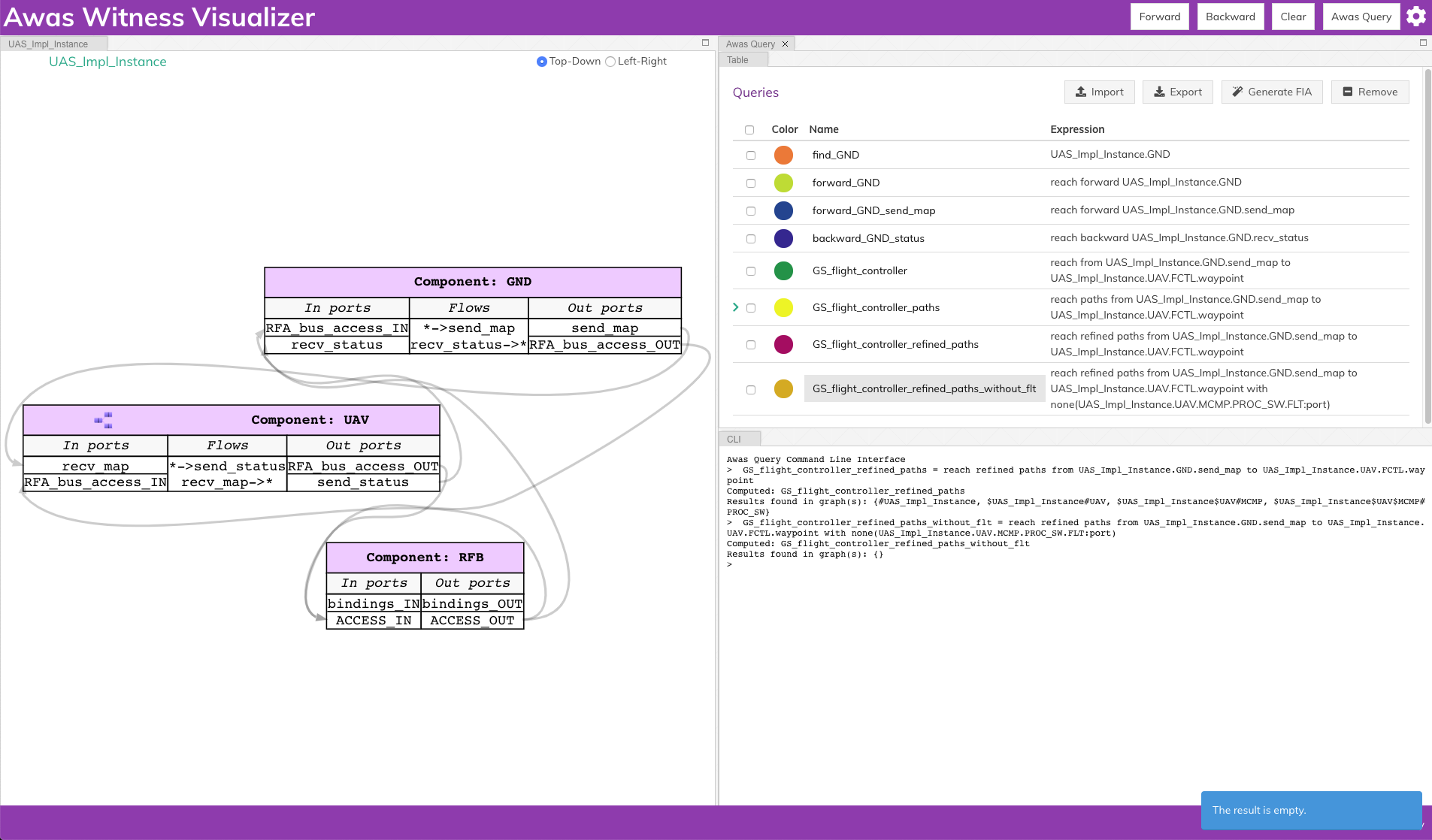 There are a few new terms contained the the previous query:

With the help of the error token propagation mechanism, the user can model the error behavior of the system. Using Awas, the user can compute the flow of errors in the system and may pose the following questions:

Is there a possibility of a hazardous situation arising throughout the system operation?

What are the root causes of a specific hazardous situation?

In our UAV system, we do not have any defined safety constraints yet. However, we do have some of the security-related properties. In the UAV system, one of the security property is that only the authorized party can communicate with the UAV. We can abuse the AADL EMV2 language constructs to model these simple properties and use Awas on top of it.

Do only authorized and well-formed maps reach the flight controller?

We can check this using Awas by the following query:

To view the results, first, we have to enable the view errors checkbox in the view settings. Clicking on the query name form the query view, we can notice only the wellformed_authenticated token is highlighted. This shows neither unauthenticated nor not_wellformed reaches the flight controller.

Also notice the use of port-error term instead of listing each error token in the query. The following query’s behavior is identical to Query 7. 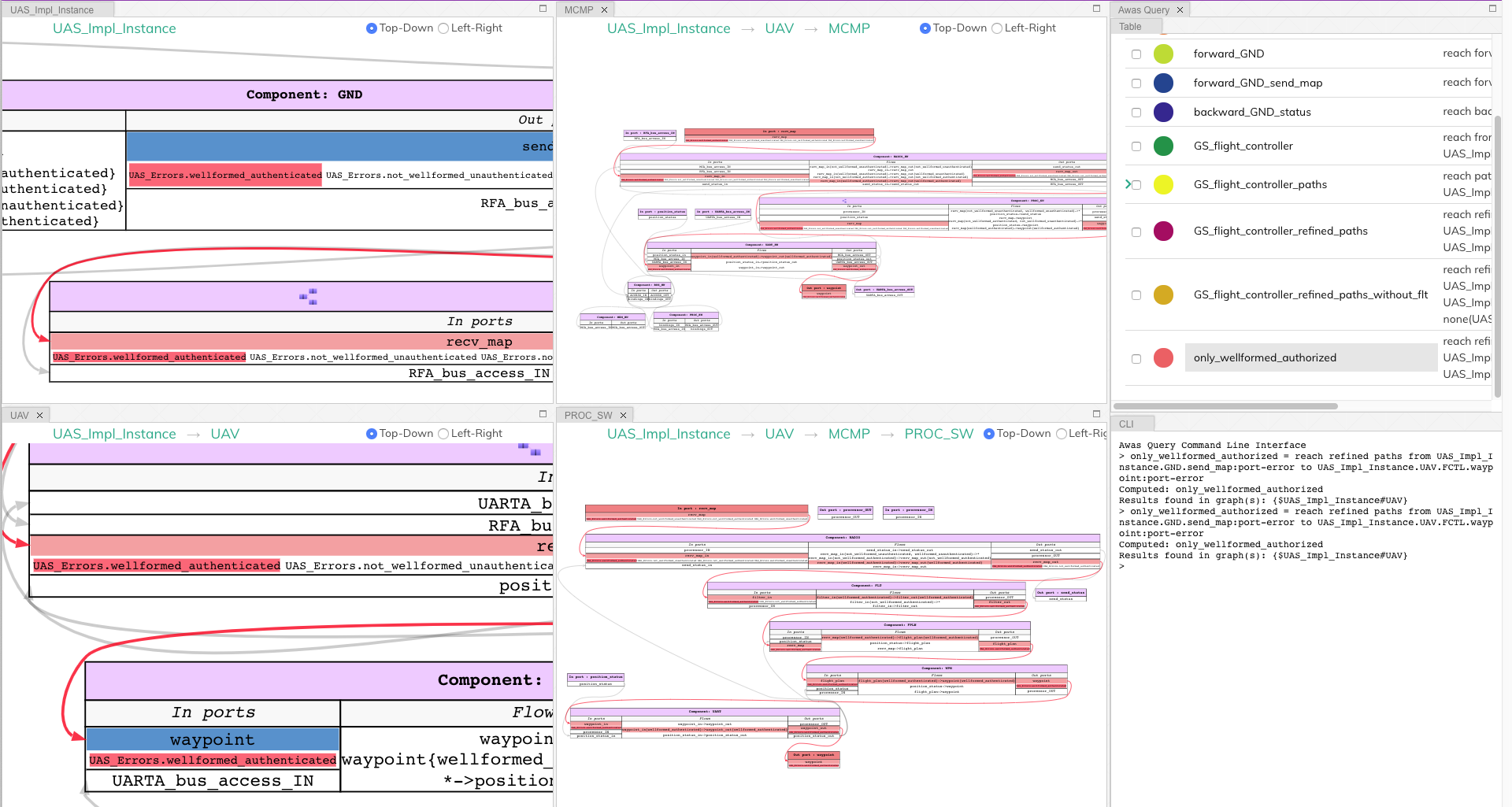